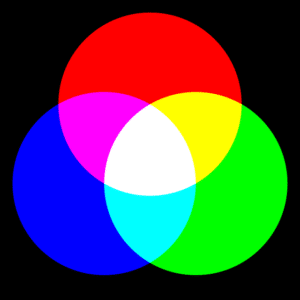 Like most other industries, commercial printing has its fair share of acronyms and they can be a little confusing for the uninitiated small business owner or advertiser.  Two of the most commonly-heard acronyms you’re likely to hear when speaking with your commercial printer are CMYK and RGB. These acronyms are used to describe two distinct color representation models. Let’s take a closer look.

CYMK refer to the colors cyan, yellow, magenta and black and is used to describe.  Why “k” for black? There are two generally accepted reasons. In four-color printing, the cyan, magenta, and yellow printing plates are “keyed” or aligned, with the black printing plate. It has also been suggested that the “K” in CYMK refers to the last letter of the word “black” and is used because the letter “B” is used to describe the color blue.

RGB is a bit more straightforward.  In RGB printing, the R, G and B refer to the colors red, green and blue. This is the color representation method used by digital cameras, scanners and computer monitors. The RGB color method is sometimes referred to as an “additive color model” because the three colors are combined in varying intensities to create all the other colors that make up an image. Oddly, when red, green and blue are combined in equal intensities, they create white.

Now that we understand the basic differences between the two color models, the question remains – “which one should you use for your printing project?”

If your project is going to be printed on a physical medium like paper stock, you’ll want to use the CYMK model. If your project will be presented electronically on a computer or television screen, you’ll want to use the RGB color model.  It’s important to remember that neither method is capable of precisely representing the boundless colors observed in nature. But technological advancements like 4K display screens deliver stunning color representation.

We hope this article helps you understand these commonly used printing acronyms.  For more answers to common commercial printing questions, visit our blog or give us a call at (817) 336-5551. We’re a family owned and operated company focused on providing small businesses in the Dallas/Fort Worth area with reliable commercial printing solutions and exceptional customer service.

Download our guide to make sure you receive the most accurate print quote!